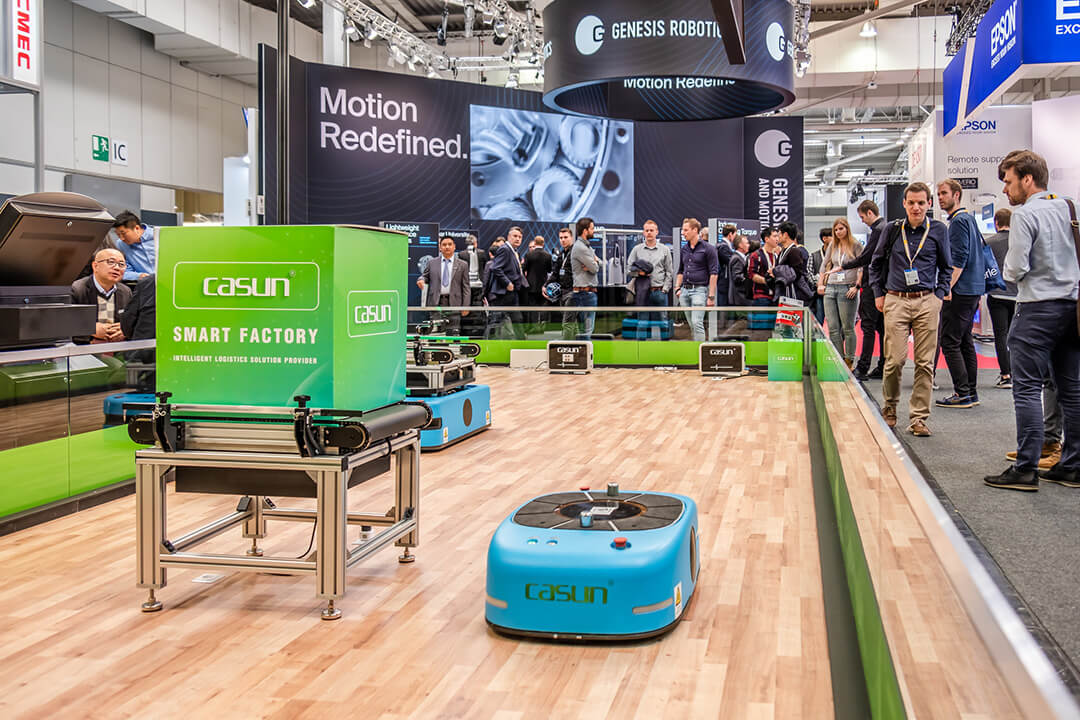 AMRs vs. AGVs. What’s the difference?

AGVs (Automated Guided Vehicles) have been moving things around on behalf of humans for over half a century. They’ve become a familiar fixture in factories, warehouses, and anywhere there’s a need for repetitive material delivery. Their effectiveness, however, is being challenged by a more technologically sophisticated approach. The past few years have seen the introduction of a new kind of internal logistics system that’s starting to take over from AGVs — AMRs, or Autonomous Mobile Robots.

It’s easy to look at both an AGV robot and a collaborative robot like an AMR and just view them as robotic vehicles that move items from place to place, but AMRs are based on new technologies that make them faster, smarter, and more efficient than the AGVs that they’re starting to replace. AMRs are also simpler to set up, easier to use, and more affordable, all of which explains why AMRs are starting to replace AGVs. But, when you understand the ways in which AMRs are different from (and far more advanced than) traditional AGVs, it all makes sense.

AMRs vs. AGVs: The Fundamental Difference

The fundamental difference between AGVs and AMRs can be summed up by the difference noted between a guided vehicle and a robot. A guided vehicle follows fixed routes, usually along wires or magnets embedded in the ground — not unlike the difference between a train and an automobile. An AGV robot is probably clever enough to use simple sensors in order to avoid hitting obstacles that pop up in its way, but it’s not clever enough to go around them. In fact, AGVs aren’t clever at all — without much on-board intelligence, they can only obey simple orders. This means that AGV robots tend to get into trouble when anything isn’t exactly the way they like it. This is in addition to their notorious reputation when it comes to adapting to change. If you want them to expand their work area, for example, it’s an expensive and time-consuming hassle.

A robotic AMR is much more sophisticated. It’s packed with sensors and powerful on-board computers that help it to understand its operating environment.

An AMR is much more sophisticated. It’s packed with sensors and powerful on-board computers that help it to understand its operating environment. Rather than being restricted to fixed routes, an AMR can instead navigate dynamically using a map, allowing it to plan its own paths and travel quickly and efficiently. AMRs are smart enough to recognize and react to people, cars, forklifts, and more. They safely perform their jobs no matter how busy the surrounding environment and can even do futuristic things like following a specific person wherever they need to go, mother duck-like.

AMRs vs. AGVs: The Business Case and The Cost

With all of these advantages, you might think that AMRs are much more expensive than AGVs, but that’s not the case. While it’s certainly true that AMRs use sophisticated cameras systems, laser sensors, and computer hardware, AMRs can be as much as 40 percent less expensive than AGVs. Because AMRs don’t need wires, magnets, beacons or any other costly infrastructure modification, getting started with them is fast and relatively inexpensive. You’ll find that AMRs complete their tasks much more quickly and reliably, saving you time and money. As your business expands, your AMRs can seamlessly expand with you. AGVs just can’t compete. And in the end, that’s the most important difference when discussing AMRs vs. AGVs — AGV technology represents an earlier generation of automation that simply can’t keep up with the flexibility and cost-effectiveness of autonomous mobile robots.

Impact of LiDAR on the Material Handling Industry